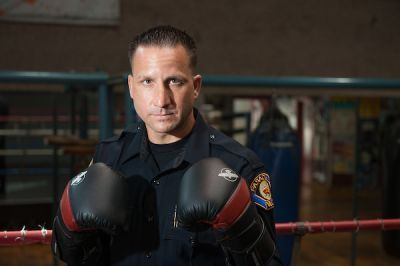 Behind the Badge Feature by Cindy Arora

We're excited to share an article by Cindy Arora from Behind the Badge about one of our local officers.

Pasadena Police Officer Fights Crime In and Out of the Ring
by Cindy Arora on October 31st, 2018

Pasadena Police Officer Brian Petrella and his trainer, Fausto De La Torre, move across the ring at Villa Park Boxing Gym, bobbing and weaving to the crooning of James Brown.

Petrella’s footwork is meant to match the rhythm of the music. Much like dancing, footwork is a foundation in boxing. A heavy foot can mean getting hurt, says De La Torre.

So, you gotta get loose.

Petrella shows up every week ready to learn. Not just because he loves the sport, but because boxing ultimately makes him a better police officer.

“In boxing you learn how to breathe, how to control yourself, how to look at a situation and know you can handle yourself,” he said. “It gives you the self-confidence you need when you are out in the streets.”

Back in September, Petrella’s boxing practice and police work merged when he got a call from dispatch during his shift. A woman on Pasadena’s notorious Colorado Street Bridge was threatening to jump.

He would be the first responder and he knew those first few minutes could mean life or death.
When he found the woman, she had climbed onto the other side of the bridge and was holding on to the outside fence. Two onlookers had stayed with her and had been trying to talk to her until help came.

When Petrella arrived at the scene he knew he needed to breathe, control himself, and remain calm.

Rather than reach out to the woman, they talked for hours.

He tried to maintain eye contact, so she knew he was watching her. But she didn’t want to meet his eyes. She cried, she prayed, and after 13 hours, she finally climbed over to the other side and allowed the Pasadena Police Department’s Homeless Outreach-Psychiatric Evaluation (HOPE) Team help her.

“When we were talking, she asked me if she climbed over – could she just go home. She just wanted to go home and go to bed,” Petrella said. “But I couldn’t lie to her. She knew better. She knew that once she climbed over that bridge back to me, she wouldn’t be going home.”

Petrella understood her hesitation. He had been around long enough to understand there is a process to the system. There would be doctor visits, a hospital stay, and ultimately she would be sent back into the world, to find a way to deal with things on her own.

Petrella takes cases like this into the ring – so he can leave them there. With every bob, weave, and hit into his trainer’s mitt, he finds that the stress of the job melts away. It makes him a better cop, a better father, a better husband, and a better boxer.

On his days off, you can find Petrella at Pasadena’s Villa Park Boxing Gym training with De La Torre. His presence in the community means a lot to the kids, who know him as a boxer, but also know he is a police officer.

“It’s an honor to have one of Pasadena’s finest here changing the perspective that kids have of police officers,” De La Torre said. “He comes here and talks to the kids – they see him as someone who fights crime and fights in the ring.”

Petrella has been a Pasadena police officer for 13 years. A New York transplant, he had wanted to live in Los Angeles since he was a kid watching football games. During Raiders games, the camera would pan through the sunny skies of L.A. in the middle of December and he couldn’t understand how he could be snowbound in one part of the world while LA remained summer-like all year long.

He began competing as a representative for Pasadena Police Department in 2011. He worked with a trainer and became immersed in a sport his family had warned him against since he was a kid.

In the Petrella family, boxing is a family legacy. His grandfather was a professional boxer, but no one wanted Petrella to follow in his footsteps. So while he got a few tips here and there from his grandfather, in the end, he gravitated toward the sport on his own.

His injury changed him. He was a bit more cautious and had a deeper understanding that in boxing, one hit is all it takes. But he always knew he would get back in the ring.

“One of the things I love about boxing is how it makes you accountable. There’s no easy way out of boxing. If you don’t train, it shows. If you don’t give it your all, you will see it in the ring,” Petrella said.


View the article on Behind the Badge here.