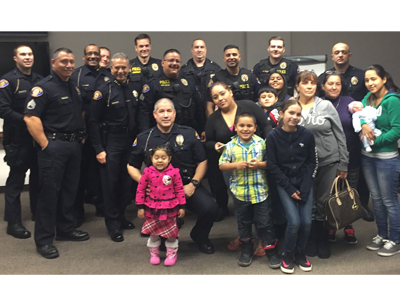 A gift for the Castaneda Family

On December 10, 2015, Officer Herrera responded to a call of a 5 year old not breathing at 13 W. Hammond. Upon his arrival, the child was receiving CPR from his aunt and PFD soon arrived. PFD transported the child, Adrian Castaneda, to Huntington Memorial Hospital. Officer Herrera learned from his mother, Adrian had several pre-existing medical conditions that most likely contributed to his death. Despite all efforts from HMH emergency room medical staff, little Adrian passed away on December 10, 2015, at 06:42 Hrs. As can be expected, his mother and family are devastated.

As always, the PPD family stepped forward for the community in a time of need. Team-5 would like to thank everyone for your very generous contributions to the Castaneda family. A special thanks to Officer Ryan Smith and all of the Air Operations personnel for inviting the family to the heliport and providing them with gifts. Another special thanks to the PPOA for their contribution and Officer David Battany who obtained contributions from the Pasadena Jaycees (Pasadena Junior Chamber of Commerce Foundation).

On Tuesday, December 22, 2015, at our Team-5 briefing, Officer Herrera presented a check to Ahurelia Arellano, Adrian’s mother, for burial expenses.

Thanks to all and Merry Christmas!